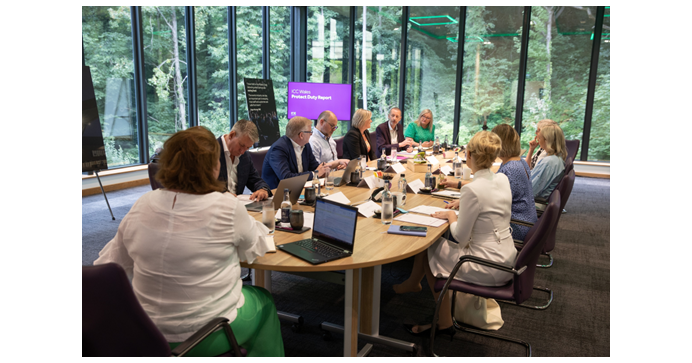 International Convention Centre Wales (ICC Wales) hosted a Protect Duty round table event this month to highlight the vital role that venues and event organisers play in ensuring that they are as safe and secure as possible for attendees.

Taking forward the industry-leading research of ICC Wales’ Protect Duty report published earlier this year, the round table was organised to galvanise the event sector’s response to the upcoming legislation.

Protect Duty (also known as Martyn’s Law) is a result of tireless campaigning by Figen Murray OBE, the mother of Martyn Hett who was killed in the Manchester Arena terrorist attack in 2017. The proposed legislation is designed to improve safety and security at all publicly accessible locations to mitigate the risk of any future terrorist attacks.

Attended by events industry leaders, the round table at ICC Wales featured a short presentation on the findings of the Protect Duty report, followed by lively open discussion and smaller group workshops to explore ideas and hone responses.

Heather Lishman, Association Director of the Association of British Professional Conference Organisers (ABPCO), said the discussions had helped break down some of the uncertainty and trepidation surrounding the new legislation.

She added: “Protect Duty can sound quite formal and scary but, when you come down to it, to protect somebody should be seen as a very positive message – it’s a caring thing to do, to save people from harm. If, as all stakeholders, we collaborate and work out what are the potential harms together, then hopefully we can alleviate the risk as a team effort.

“New laws always seem like a big change to begin with and then it just becomes a part of everyday life, and I’m sure this legislation will be the same because, fundamentally, we all want to keep ourselves and our event attendees safe.”

Rob Eveleigh, Managing Director of Bristol-based professional conference organiser Brightelm, said the responsibility for, and the cost of, increased security measures had to be carefully examined and that all mitigation had to be proportionate to the risk at any particular event.

He said: “Additional security costs should be factored in and passed on by event venues and organisers. There has to be a standard question for every event and that is: what is the risk? Being reasonable and practical in answering that question, we can’t ever protect against everything an individual might do. If we’re making it everyone’s responsibility for an individual’s actions, where does that stop?”

A consensus was reached that more work needs to be done to bring the events industry together to impact the Protect Duty legislation in a proactive way before it reaches the statute book.

Nancy Mollett, Venue Director at ICC Wales, said: “Having worked with Figen Murray on the creation of our Protect Duty report, we were very keen to throw another spotlight on this important legislation.

“It was fantastic to see such a high level of engagement from everyone around the table and this reinforces our belief that the events industry can work together, and proactively, to shape the Protect Duty legislation and our response to it. It is in all our interests to take every reasonable step possible to mitigate the risk of terrorist attack, and to make our venues and events as safe and secure as they can be.”

ICC Wales launched its Protect Duty report, with expert contributions from counter terrorism security specialists and a foreword by Figen Murray, in March and has since presented on the subject at IMEX and The Meetings Show. Protect Duty formed part of this year’s Queen’s Speech programme of parliamentary business and is expected to be enacted within the next year.